Jose Mourinho might not be in his best form but he’s had Klopp’s number in recent years. Will Jurgen Klopp finally be able to defeat Jose Mourinho in a Premier League encounter? It’s been a dream week for Liverpool as they jumped to the top of the Premier League table after winning 4-0 against Bournemouth last weekend, and later in the night Chelsea handed Man City their first league defeat of the season which was an icing in the cake for the Reds. A crucial win against Napoli in midweek just made it better as the Reds qualified for the UCL knockout stages. Liverpool remain the only unbeaten side in the Premier League this season and Jose Mourinho would be delighted to be the ‘Special One’ to break the streak.

While Liverpool are fighting for the title, Man United are struggling for a top four spot in the league table. The Red Devils are placed 6th in the league, eight points behind 4th place Chelsea. Man Utd had a mix set of results during the past week, defeating Fulham 4-1 at the Old Trafford but losing 2-1 to Valencia in midweek.

Man United’s downfall this season arguably has been due to their lack of consistency. For instance, when Man Utd defeated Juventus at Turin (which only a few clubs can do), they had momentum going into the Man City game but then they lost 3-1 to the Citizens followed by a goalless draw against Crystal Palace which killed off their momentum and they had to start from scratch again.

While Jurgen Klopp’s side have been dominating in the Premier League, they have not been able to break through the Man United side, with their last 5 matches against the Red Devils including three draws and two losses. It’ll be interesting to see if Jurgen Klopp has a special plan for the Special One this time around.

Nathaniel Clyne is back in training but may not be fit enough to play the whole 90 mins, in that case, James Milner might start at right back.

Victor Lindelof, Alexis Sanchez and Marcos Rojo are ruled out with injuries.

David de Gea and Nemanja Matic, who were rested in midweek during the trip to Spain, are back in contention and likely to start against Liverpool.

Liverpool and Man United have met 52 times in the Premier League with Man Utd being the dominant side with 28 wins to their name. Liverpool have been on the winning side 13 times and both teams sharing points on 11 occasions.

The last encounter between the two sides resulted in 2-1 victory for Man United with Marcus Rashford scoring a brace for the Red Devils.

Jose Mourinho has won 50 per cent of his PL away matches at Anfield (winning 4 out of 8 games).

Liverpool are looking for their first win in nine PL matches against Man United (D3 L5). They haven’t gone longer without a win against the Red Devils in league competition since April 1988 (12 matches).

Liverpool’s forward trio of Roberto Firmino, Mo Salah and Sadio Mane are all yet to score or assist in a PL match for the club against Man United, despite playing a combined total of 855 minutes.

Juan Mata has been involved in 7 PL goals against Liverpool (three goals, four assists), including three in his last three at Anfield. Only against Newcastle, with eight, has the Spaniard been involved in more goals in the competition.

Heading into the clash, let us look at the influence of the goal-scorers of both sides so far : 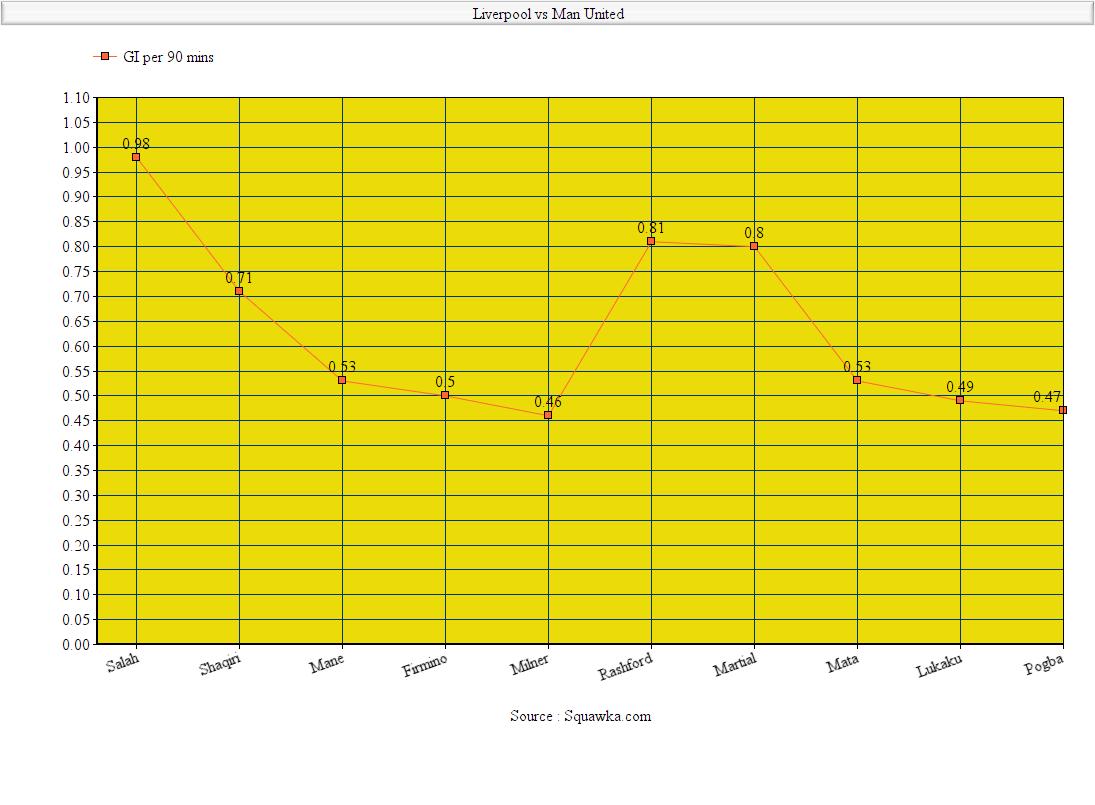 The stat on the basis of which the players are being compared here is their goal involvement per game, meaning, the goals scored or assisted by a player per 90 mins.

As we look into the graph, it is clear that Mo Salah has been the most influential player in attack for Liverpool with 10 goals and 4 assists at almost scoring or assisting a goal per game.

The inclusion of James Milner and Paul Pogba in the graph, despite them being central midfielders is because they are the preferred ones to take penalty kicks and can influence the game at any point.

Liverpool continue their unbeaten run in the Premier League after defeating Bournemouth 4-0 last weekend, and the Man City defeat to Chelsea was an icing in the cake for them as the Reds jumped to the top of the league table. The winning momentum continued in midweek where they defeated Napoli 1-0 to qualify for the UCL knockout stages.

Man United have had a mixed set of results over the past week, winning 4-1 against Fulham in the weekend but losing 2-1 to Valencia in midweek. The Red Devils are placed 6th in the league table, 8 points below 5th place Arsenal and 16 points below table-toppers Liverpool.

This website uses cookies to improve your experience while you navigate through the website. Out of these, the cookies that are categorized as necessary are stored on your browser as they are essential for the working of basic functionalities of the website. We also use third-party cookies that help us analyze and understand how you use this website. These cookies will be stored in your browser only with your consent. You also have the option to opt-out of these cookies. But opting out of some of these cookies may affect your browsing experience.
Necessary Always Enabled
Necessary cookies are absolutely essential for the website to function properly. These cookies ensure basic functionalities and security features of the website, anonymously.
Functional
Functional cookies help to perform certain functionalities like sharing the content of the website on social media platforms, collect feedbacks, and other third-party features.
Performance
Performance cookies are used to understand and analyze the key performance indexes of the website which helps in delivering a better user experience for the visitors.
Analytics
Analytical cookies are used to understand how visitors interact with the website. These cookies help provide information on metrics the number of visitors, bounce rate, traffic source, etc.
Advertisement
Advertisement cookies are used to provide visitors with relevant ads and marketing campaigns. These cookies track visitors across websites and collect information to provide customized ads.
Others
Other uncategorized cookies are those that are being analyzed and have not been classified into a category as yet.
SAVE & ACCEPT